In this post, project organisers Abigail Tazzyman and Bridget Lockyer reflect on the first session of Moving Beyond Boundaries at Huntington School

On the 26th February Moving Beyond Boundaries: Gender, Knowledge, History held its first session at Huntington School in York with twenty-five AS level students from Huntington, Fulford and Bootham Schools.  In this session we introduced the project and ourselves and tried to gauge students’ current knowledge of women’s history, their experience of being taught it at school and their views on its role and importance. We were lucky enough to have use of the school library with plenty of room for group work and movement, providing an interactive learning and teaching environment.

We began the session with the basics, asking students to shout out which elements of women’s history up they could remember learning about. We asked them to include any women that they had studied in subjects other than history such as English, Maths, Science, Art, Music etc. The first list was relatively short: the Suffragettes, women who worked in the First World War effort, Marie Curie, Rosalind Franklin, Christina Rossetti, Charlotte Bronte and Amy Johnson. Amy Johnson and Charlotte Bronte found their way onto the list because two of the Huntington School houses are named after them.

What elements of women’s history could they remember learning about?

This list was expanded after the students were asked to fill out a written questionnaire and to compare their responses in small groups. Mary Seacole, Rosa Parks, Boudicca, Mother Teresa, Elizabeth Fry and various queens of England were added to the list. A few women writers were named: Caryl Churchill, Susan Hill and Angela Carter as well as the artist Georgia O’Keeffe. The flapper girls of the 1920s and women in 1950/60s Britain also got a mention. Overall, their knowledge was what we expected, it fitted with what we had learnt from conversations with history teachers and chimed with our own experiences of women’s history at school. The students obviously had some understanding of women’s history, but this was focused around key individuals who were often presented as the exceptions.

We were however very reassured by the level of engagement and contribution of all the students taking part. Both in small groups, class discussions and presentations the students were responsive, offering honest and thoughtful answers and giving clear consideration to the material they encountered. The most fruitful discussion sprung from a question about equal representation of men and women on the history curriculum. Most of the students recognised that women were less represented than men. Yet the reasons they gave for why this was the case was interesting and particularly thought-provoking for us as a team. 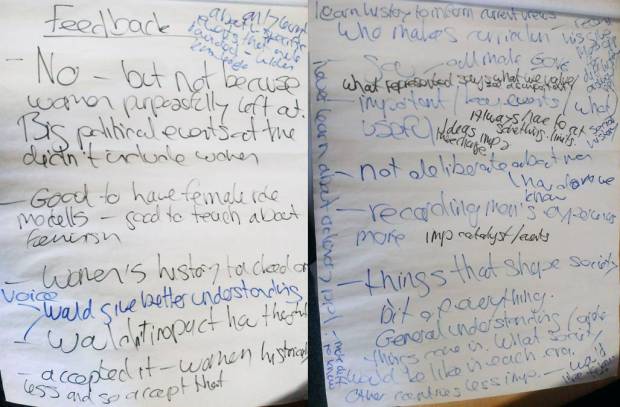 Do they think men and women are equally represented on the curriculum?
If not, why not?

The students felt that although it was true that women were less represented on the curriculum, this was not deliberate. For them, women in the past contributed little to society. Compared to men, they had not taken part in or even been present during big, ‘world-changing’ events, and this was because they lacked the opportunities to do so. The exclusion of women on the curriculum now was just a consequence of them being prevented from doing anything worthy of note in the past. From the student’s perspective, we could not learn about a history which never existed in the first place.

We were particularly struck by the implication that the curriculum emerged organically, merely reflecting the ‘truth’ about women’s position and roles in the past. We asked the students to think about who devises school curriculums and why, and that this is not an objective process. One student suggested that a male bias could emerge because most of the people making decisions on the curriculum were male themselves.

Within the students’ responses there were also judgements on what counted as noteworthy and which parts of history warranted being taught in school. In a discussion about the women on the banknotes campaign, a few of the students argued that Jane Austen was less important and influential than Charles Darwin (the current face of our £10 notes). They contended that Austen had only been chosen because she was a woman, and that her actual contribution, writing novels, was quite insignificant in comparison. Here, we reminded the students that male writers had also featured on the banknotes in the past, most notably Charles Dickens.

When we asked which parts of history the students considered to be important, there was general agreement that war, politics and science were the most significant. These were the things that had shaped society, and the students wanted to learn history that better enabled them to understand contemporary Britain. They felt that they should not be ‘forced’ to learn about women’s history, when, as they argued, their contribution to the making of Britain (and the world) was so limited. Again, women’s cultural contributions were sidelined, regarded as less significant. They also did not consider that the reason why they believed women had not been part of political or scientific developments was because they had not been taught about it.

Not all of the students felt the same. A small minority argued that for a woman to be recognised at all given the challenges she faced, was remarkable and should be taught in schools. They also argued that women have often been written out of history, meaning that their contributions have been forgotten or undervalued. They acknowledged that women’s lives were less recorded than men’s and that in general, the curriculum struggles to cover the lives of ordinary people, only the famous or exceptional, and this was partly to blame for the under-representation of women.

It was interesting that the few students who challenged the dominant view were mainly from Fulford School where they have an initiative called ‘Feminist Fridays’, a time dedicated to focusing on and learning about women and women’s rights both in the past and present. As a result, they appeared to be more open to taking a more critical look at women’s inclusion on the history curriculum.

We finished the session on an activity which questioned students’ assumptions of women’s roles at different points in British history: Roman, Medieval, Victorian, 1950s and 2014. This exercise was to get students to think about what women have been doing for the last two millenia. For example, most of the groups initially stated that women were unlikely to work during their allotted time period, but on further consideration, began to list some of jobs women might have done.

It is important to note that we were very keen to hear the views of all the students in this first session, and we made sure that we did not disagree or argue with their contributions. Instead, we wanted to open up the debate and encourage them to think more critically in the weeks to come. The project now moves on to the workshop stage where each week the students will engage with a new area of women’s history that they have not previously encountered. It will be interesting to see whether or not their perspectives will change.